School Librarians as OER Curators: A Framework to Guide Practice: About OER

Have you heard about Open Educational Resources (OER) and want to know more? This module presents an overview of what they are and why they matter for libraries—and for teaching and learning.

Open Educational Resources (OER) are teaching and learning materials that reside in the public domain or that have been released under a license that permits no-cost use, adaptation and redistribution. Many folks identify OER solely as open textbooks or full courses that are openly licensed. However, OER, by definition, also include single resources such as videos, primary source texts, 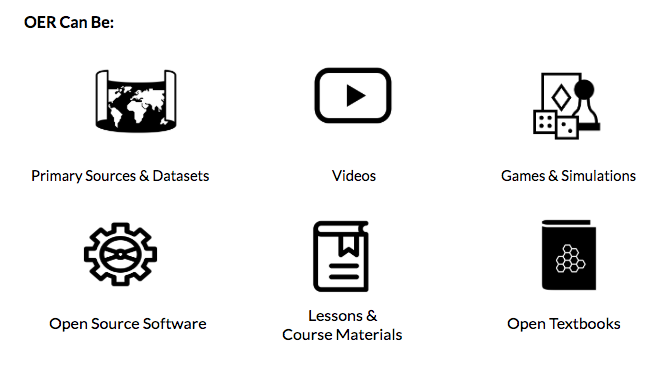 OER are typically licensed under an open licensing system, the most popular being the Creative Commons (CC) licensing system. Open licenses support creators who want to share their works freely, and allow other users more flexibility to adapt and share their original work. Specific benefits include:

See the About Licensing section of this LibGuide for more information on open licensing.

Below are four key categories of resources that are often considered to fall outside the definition of what is truly the intention of OER, because their licenses and use permissions do not allow for the full range of possible use cases—from sharing, to repurposing, to adapting and remixing resources. Of course, the best mix of materials to meet any given set of learning outcomes will vary, and may include a combination of OER and the materials listed below. The key is knowing which resources will best meet your objectives for curation, for instruction, and for learners.